In a busy hospital setting, the changing rotation of doctors and nurses and sheer number of patients make it critical that patient’s records are accurately entered and maintained, and that patients are identified correctly. Ensuring that the records match the patient, and that they have been accurately maintained, makes a critical difference in patient well-being, as highlighted by a new study. 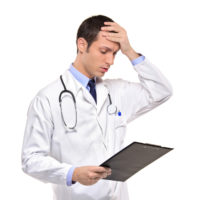 he nonprofit ECRI Institute recently published a study examining the effects of patient misidentification errors, and the frequency with which they harm the misidentified patient. The researchers examined 7,613 voluntarily-reported “wrong-patient errors,” as they’re labeled by health care professionals, occurring in 181 health care facilities of various varieties and sizes nationwide. The researchers looked at when and how these errors were detected, and whether any harm to the patient resulted from the error. In the majority of these cases, the misidentification was detected before patients could experience any harm. In the approximately-1,700 cases where a harm score was submitted, the patient did not experience any ultimate long-term harm as a result of the misidentification.

Serious harm can result from these errors

In several cases, however, the misidentification did result in serious and preventable harm to the patient. In one incident, a patient was not resuscitated during surgery when the wrong records were pulled up for that patient, and the patient was wrongly identified as having had a do-not-resuscitate order on file. In another incident, a patient’s records reflected that they had been cleared for surgery, but this had not occurred. The patient was operated on, but did not survive through the next day. Another incident involved giving the wrong mother’s expressed milk to an infant, resulting in that infant being infected with Hepatitis through the milk.

Why do these errors occur, and what can be done?

One issue identified as a factor contributing to wrong-patient errors is the limit on shift lengths among health care professionals. More frequent changes in staffing results in more frequent hand-offs, and with each hand-off comes an opportunity for miscommunication regarding a patient’s case. Another problem the researchers identified was the absence of patient wristbands, or failure by personnel to check the patient’s wristband prior to a procedure or test. Hospitals are advised to implement a uniform patient identification method, and to confirm patient identification by asking patients to repeat their name rather than simply stating it and asking whether that is or isn’t correct.