Risk of Serious Injury or Death from Infections Received in Hospitals 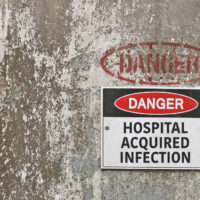 As a patient in a hospital, not only are you vulnerable as a result of the condition which sent you to the hospital initially, but you’re also at risk of contracting an infection from the hospital itself. Read on to learn about infections received from hospitals, and contact an attorney as soon as possible if you believe you received an infection while in the hospital.

According to the CDC, approximately one in 25 hospital patients has one or more healthcare-associated infections (also known as an HAI). Some studies estimate that approximately 75,000 Americans die each year as the result of hospital-acquired infections, with thousands more made seriously ill. The American Medical Association has estimated that infections transmitted through hospitals and long-term care facilities result in roughly $10 billion in costs to the US healthcare system every year. Unlike illnesses contracted on a day-to-day basis, hospital-based infections are more likely to cause serious illness. Common hospital-acquired infections include C. Difficile (often called “C. Diff”), a bacterial infection that affects the gastrointestinal tract causing severe diarrhea, and causes fatal illness in roughly 14,000 patients a year. Other dangerous illnesses that are frequently transmitted in hospitals include antibiotic-resistant infections such as Methicillin-resistant Staphylococcus Aureus, or MRSA, a staph infection that does not respond when treated by traditional antibiotics, and Sepsis, an infection of the blood which can be lethal if not treated in a timely manner.

Healthcare-associated infections are in large part preventable, making it even more troubling that these infections seriously injure or kill so many patients. There are many procedures which are or should be in place in healthcare settings to prevent transmission of infection, such as careful hand-washing practices, changing catheters regularly, promptly removing catheters or IVs when no longer needed, and proper use of gloves and gowns. A hospital can face financial liability should it fail to adhere to good practices on controlling the spread of germs if an infection received in the hospital was preventable and medical professionals failed to identify or treat it immediately. There are steps you as a patient or patient’s family member can take to try and prevent infection, such as thoroughly researching hospitals and their infection rates beforehand, insisting that doctors wash their hands before touching you, and asking regularly whether an IV or catheter is still necessary.

If you have been injured as the result of negligent treatment in a medical facility in Maryland or Washington DC, contact the compassionate, knowledgeable, and effective Rockland medical malpractice attorneys at Brault Graham for a consultation on your case, at 301-424-1060.

By Brault Graham ,LLC | Published January 30, 2017 | Posted in Uncategorized | Comments Off on Risk of Serious Injury or Death from Infections Received in Hospitals